The charging section of the Finance Act, 1994, Section 66B provides that service tax should be levied on all services except the services which are specified in Section 66D of the said Act. As per Section 66D of the Financial Act, 1994, Negative list of Service Tax for 2013-14 is given here which is revised as per latest budget. There are currently 17 heads of Services which are given in the “negative list”. This Negative list of service tax is very important because every activity not covered under this list is chargeable to Service Tax. This list is also very useful in CA IPCC Paper 4 Taxation also. 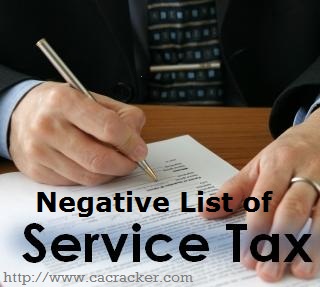 SERVICES BY WAY OF ADVERTISEMENT:

DETERMINATION OF RATE OF EXCHANGE:

17. Funeral, burial, crematorium or mortuary services including transportation of the deceased.

Two more services have been included in the negative list for service tax. These are:

Vocational courses offered by institutes affiliated to the State Council of Vocational Training; and, testing activities in relation to agriculture and agricultural produce.

The Finance Minister has also accepted the request of the Film Industry that full exemption of service tax granted on copy right on cinematography be limited to the films exhibited in cinema halls only.

The rate of abatement for such homes and Flats which have a carpet area of 2000 sq. ft. or more; or have a value of Rs. 1 crore or more, has been reduced from 75% to 70%. However, low cost housing and single residential units will continue to enjoy existing exemptions from service tax.

If you have any query then kindly comment below.