After the declaration of CPT result, ICAI will declare the pass percentage of CPT exam. And below, we will update CA Foundation, CPT Nov 2018 pass percentage.

Right now, the CPT Pass percentage is not available as ICAI has not declared it yet.

Till then, must check: CA Foundation CPT Toppers Nov 2018

Also have a look on: CA Final Pass Percentage

If you are passed in CPT: After Clearing CPT Exams, a student is required to enroll himself for IPCC. Check this post for more information about IPCC: IPCC Registration Procedure and Syllabus Details

After the declaration of CPT results, we will update CPT June 2017 Pass Percentage here. 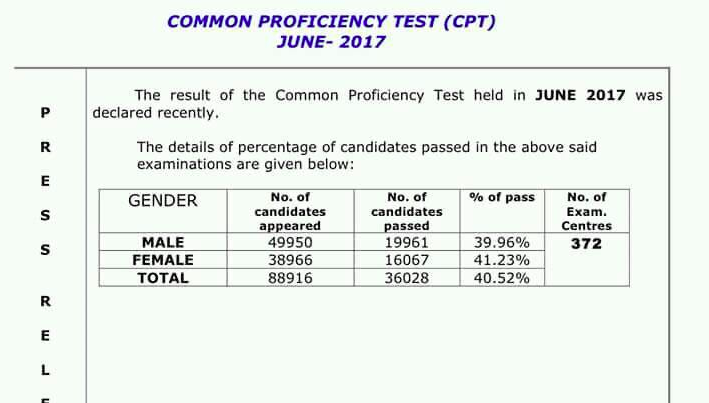 If you are passed in CPT: then check IPCC Registration May 2018

Our expectation is based on the trend of results.

For more details, please stay tuned with us.

After the result of CPT June 2016, ICAI will declare cpt pass percentage officially which will be updated here.

Stay tuned with us.

Stay tuned with us for the updates.

On 16th July 2015, after the declaration of CPT Results, ICAI has declared CA CPT Pass Percentage June 2015 in evening.

On today 16th July 2014, ICAI also declared CPT pass percentage of June 2014 attempt after the declaration of the result which is 28.63%.

Stay tuned with CAcracker for the updates of CPT Pass Percentage June 2014.

Below I have given past 12 attempt pass percentage.

The next CPT exam will held in December 2014, to get more information about date and fees structure go  to CA CPT Exam Date & Fees Structure.

So, from the result of CPT December 2013, we can see that results of CPT are increased by 10% as compare to past two attempts which is a good sign for CPT students but at other hand CA Final pass percentage are just around 3% with compare to past attempt’s 10%, so, CA Final results are much lower. ICAI wants more students to enroll for CA course and thus earning much more…lol. But, don’t forget you can crack CA IPCC and Final in first attempt and be a ranker too, to know how check >How You Can Pass CA IPCC & Final Exams in 1st Attempt Easily.

So, CPT passed out guys, be prepared for difficulties and hardships and get ready to do dedicated preparations and study & most IMP stay tuned with CAcracker to go with Cracking CA exams with ease with our tips and tutorials.

CA CPT Pass Percentage June 2013 are given below.

Get this too: CA CPT Admit Card

The pass percentage analysis of CPT December 2012 is as follow:

Below,  group-wise results/pass percentage of CA CPT December 2012 is given.

Enjoy your stay at CAcracker !!!